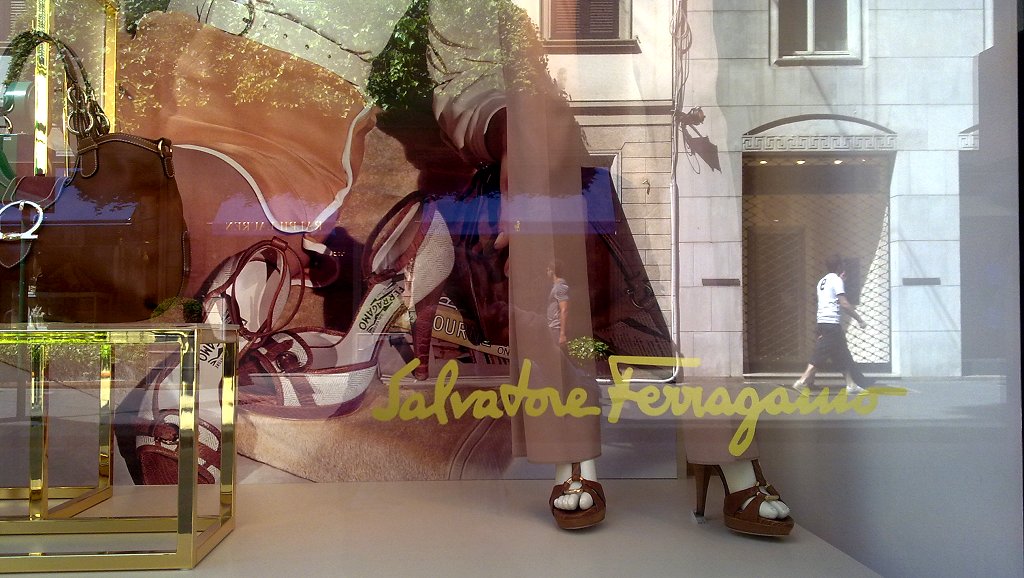 
In order to fight any further diffusion of COVID-19, people are advised to be very cautious when meeting others, even outdoor. A distance of a meter or so must be kept - and a face mask (better if surgical) worn - in case of any personal encounters.
.:. Milan and Lombardy are still at risk, though bars, restaurants, shops and even museums began reopening from June 3. Schools started again on September 14. Yet, though we kept our fingers crossed, a new lockdown has been enforced starting from November 5. This second lockdown has been partially lowered stating from Sunday, December 13.
.:. Official news at the YesMilano website.


.:. Alviero Martini 1ª classe
Bags, suitcases, umbrellas, hats and apparel with the world maps the brand is famous for printed on them.

.:. Bottega Veneta
Its name in Italian means 'Venetian shop', and in fact the main branch is located in Vicenza. Their Veneta and Caba bags are well known. They also have clothing for both women and men.

.:. Bruno Magli
A large company based in Bologna which is successful worldwide. It also does a line of hand-made shoes.

Via Alessandro Manzoni 20 / Via Monte Napoleone

.:. Car Shoe
The gentlemen drivers' approach to the shoe side of this life. In brilliant colors, too, Since 1963.

.:. Fratelli Rossetti
Elegant shoes famous the world over for their comfort and wear. Another outlet in Corso Magenta 17.

.:. Geox
Here they sell patented shoes that claim to let your feet "breathe". Young styles. Other shops in the main shopping areas.

.:. Gucci
Flagship shop for a name that needs no introduction where you can find everything belongs to the Gucci brand: bags, clothes, shoes, eyewear... Classics and brand new lines.

.:. Hogan
The "Montenapo" outlet for the brand created, along with Tod's, by successful shoe-maker Diego Della Valle. Tod's is at Via della Spiga 22, as well as in the Galleria. The Fay brand for clothing belongs to the same group, and its men, women and kids lines are at Via della Spiga 15. The three labels are on sale together at Dev, Corso Vercelli 8.

.:. Salvatore Ferragamo
Manufactures, since 1926, shoes for any type of foot. The legendary American producer, Cecil B. De Mille, and the glorious Greta Garbo wore Ferragamo shoes. Wedge-heel shoes were a Ferragamo invention back in the 1930s. There is also an infinite variety of accessories in leather and classic apparel for men and women. The men's line is in Via Montenapoleone 20/4.

.:. Valextra
Itself an authentic Milanese tradition, Valextra is famous for wallets and small leather goods, some of which are patented (the rigid key-rings, for example).